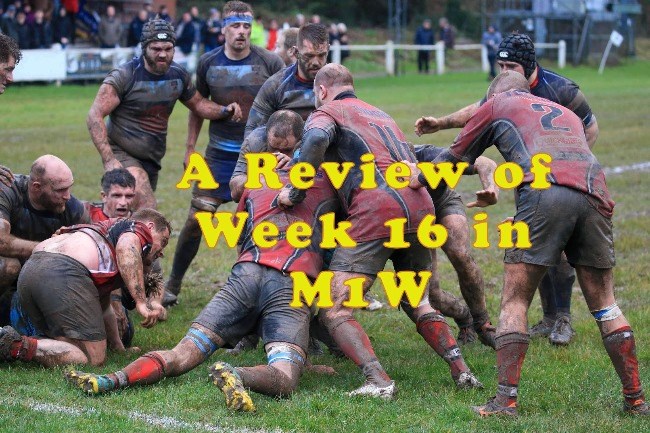 Week 16 saw some interesting results across the league, with some results giving teams perhaps unexpected points and other teams chalking off difficult fixtures. The top of the table has closed up a little with Hereford doing the business against DK, while at the other end only really Worcester made a move.
First to Friday night:
Lichfield 40 Sutton Coldfield 0: This one went with form, but following their good performance the week before Sutton must have thought they would be closer on the scoreboard.
On to Saturday and our Prediction race , well we agreed on four of the five Saturday games and only got one wrong and Worcester’s 8-7 away win at Old Hales saw Neil pull one back.
First to the one we disagreed on:
Old Halesonians 7 Worcester 8: Well the actual result, justifies the disagreement, but it gave Neil the spoils this week, Though, the result did meant that Old Hales and Worcester swopped places in the league, and both kept their distance from those below them. The big Question is will either of these two slip into a relegation battle?
We got one wrong:
Newbold on Avon 15 Stoke on Trent 18: We had both gone with the improved form of Newbold in this one, but Stoke look to be back on track now and pulled off the win, in a close game, it looks like both teams are destined for mid-table this year.
The rest we agreed on and were correct:
Kenilworth 55 Droitwich 14: This one went with form, but Droitwich need to be aware that they are very much the target of the two teams below them.
Kidderminster 0 Whitchurch 34: Another game with form, Whitchurch are up to fourth their highest position this season, but they are still a long way off the play-off spot. Kidderminster are now 18 points behind 11th place Droitwich with 10 games left.
Ludlow 20 Stourbridge Lions 18: Form again, but Lions will be pleased to get the bonus point, and closing the gap to Droitwich. Ludlow don’t seem to be able to make a mark on the table, though they are now nine points above 9th place.
Constable Dai, was at Hereford to see a hard fought game 11-7 to the home side, and DK still atop of M1W.